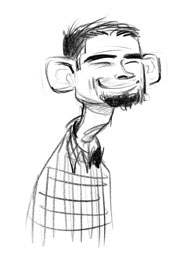 I came to animation in a round about way. I grew up in Orange, California and at sixteen found my first employment at “The Happiest Place on Earth” selling popcorn and churros. Great job – highly recommended, especially back then if you enjoyed wearing yellow pants. I quit a while later to do all those fun high school activities the kids talk about these days but went back again during college and worked in the Entertainment Art Department. My portfolio to get that job consisted of t-shirts for high school clubs and photos of homecoming floats I helped build. Another great job – it was the first time I had been around real, talented artists. That job consisted of me acting like I knew what I was doing, and all those talented painters, sculptors, woodworkers, and designers showing extreme amounts of patience. I edged my way toward the computer room where I ended up cutting vinyl lettering for signs. (You know those Calvin peeing stickers on car windows? That vinyl stuff, before it was cool and now not so cool again.) Entertainment Art creates signs and props and helps decorate events like when Elizabeth Taylor rents Disneyland for her birthday. Those events honed my skills at making any place look dressed up with an armful of potted ferns, some zip-ties, and a roll of black duvatyne. The most unique thing I did at that job was paint a set of speakers to look like wood to go in the office of the president of Disneyland. It felt important at the time.

On a break one day, I discovered a shelf filled with binders of model sheets of all the Disney characters. I was hypnotized, mesmerized, and then bummified when I realized that I couldn’t draw to save my life. I spent many lunches secretly drawing characters from those sheets and then disposing of them deep in the trash can. I can’t say I had hopes back then of becoming an animator. It seemed impossible, something that I couldn’t even consider. Dreams and intentions are different. At that time, I only dreamed of how great it would be.

I went to U.S.C. with lofty intentions of majoring in biological sciences. What? Where’s the animation? I told you, that was only a dream. I had to get down to responsible living – I was going to be a doctor! I did take a couple art courses, which reinforced my perception of a lack of drawing skills. Two and a half years later I had forgotten about science, then I forgot about business, then I forgot about “undeclared,” then I forgot about art. I did a lot of forgetting in college. What a waste it had been! All that time and no plan. This is why I always recommend Junior College first when you don’t know what you want to be.

A woman who worked at my high school knew that I was good with computers and recommended an animation course at a high school near Diamond Bar. It was an after school program that adults could attend too. So far my “no plan” wasn’t working so I figured I’d have nothing to lose by checking it out. The short name of the class was the Rowland Animation Program. Dave Master, a high school teacher, ran the class like a guild workshop. The more experienced students trained the beginners. They taught hand-drawn and computer animation. I thought computer animation was the natural, less painful choice for me. The atmosphere was energetic and focused and there was a plan: to get the students jobs in the animation field. I was already enrolled for the fall semester at USC but decided to pay my $25 to take the Rowland class. That’s right, twenty-five bucks. The whole computer thing didn’t work out as planned though. They had one computer and I knew access to it would be limited. Since I was starting with zero knowledge anyhow, I decided to take the hand-drawn animation path. (Sounds sinister, doesn’t it?) Anything looked better than taking more college courses.

My timing could not have been better. The class had been growing for years and by now developed a great reputation for producing hireable artists. Disney decided to take a chance that year and hire ten Rowland students as interns for the following summer. I had nine months to produce a drawing portfolio and animation reel – from scratch. I ended up spending so much time going to every drawing class I could find and animating tests the rest of the time (and preparing decorations for Rowland’s open house – those Entertainment Art skills still at work), that I failed all my courses and eventually dropped out of college. I was at the point of no return. My education was a shambles and this HAD TO WORK.

A point of progress was spring break. A group of students would be chosen to “job-shadow” selected artists around Disney for the week. When the names were called I did not make the cut, but that didn’t mean I was out of the running for the internship. I went in to overdrive and found more classes and kept animating. Now animating was no longer a dream, but my sole intention. Finally, when the ten students were selected for the internship, I made it. I remember they said they were impressed by my progress.

It sounds crazy now, but I didn’t go to the first day of the internship. I had an obligation to my old job at Entertainment Art where I still worked part time. They needed me to help set up an event at Disneyland for The Lion King, which was released that summer. That was my best day of work ever (don’t worry, there have been better days since). The details of that day are so vivid in my mind, as if my senses knew that I would never experience the park the same way again. From then on I would be working on these films instead of setting up the balloons to promote them. I felt so satisfied knowing that the next day I would be doing something I could only dream about a year before.

The internship is where my real education began. You can pretty much figure out the progress from there. Nearly everything I know about animation came from the talented and inspiring people I’ve worked with (plus a couple good books). My simple advice: work hard and pay attention. My one problem was that as I got better at drawing and animating, so did everyone else! It was a genuine struggle for me and I didn’t know how much longer I could keep up. My reprieve came when the world turned upside down and computers took over. (Sounds sinister, doesn’t it?) I took all that animation experience, coupled it with my love of all things you plug in to the wall, and became a CG animator. I finally got to do all that computer animatin’ I wanted to do when I showed up at Rowland sixteen years ago.

After supervising animation on Tangled and the short Tangled Ever After, I animated on two more films, Wreck-it Ralph and Frozen. 2013 was a bittersweet year when I left Disney (bitter) to direct my first film, The Angry Birds Movie (sweet!). It made $350M worldwide – Sony’s most successful film of 2016!

In 2018, my first live-action film starring Kurt Russell will be released on Netflix!

If all that wasn’t enough juice for ya, here’s my filmography at the IMDB.

The drawing above is by my pal David Pimentel.