For many years I’ve kept my eyes open for fast and easy ways to create dynamic timelines and it appears it is a concept who’s time has finally come. There are now many websites that let you create your own custom timelines and after checking out a few, I decided to create an Animation Timeline on Dipity. 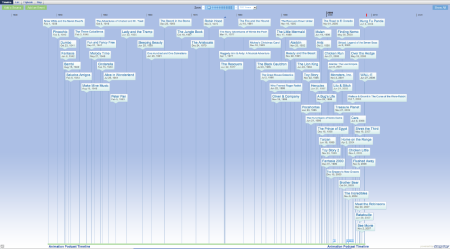 I’ve added all the Disney, Pixar, Dreamworks and Blue Sky feature films but I’m sure there are many more from years past that can be included. As a matter of fact, I wouldn’t mind having anything related to animation on there. I started it, but I won’t claim it as my own – it’s for all of us! Any one can contribute since it is editable by anyone. Just create an account on Dipity and add away. You can even edit the information that’s there if you want. It took me a while to get all the films in there, so I’m putting a bit of trust in your hands that you won’t maul it in to a work of evil, but I know you’re a good bunch and animation types generally watch out for each other.

I would love it if individual events could be added from the accounts of these podcasts, but that is beyond my means. If anyone is willing, that would be very cool to see. Whatever happens, I thought it would be fun to share with you.

For me the most striking view is to open the timeline full-screen (click the button in the lower left corner) to see the pattern of how many films were released over the years. (See the thumbnail above.) You can follow the boom after Snow White, the fallow years of the 50s and 60s, and then the explosion of releases in the last couple decades. As you can see, animation is booming and that’s great for all of us!

Check it out and add to it if you’re inclined.